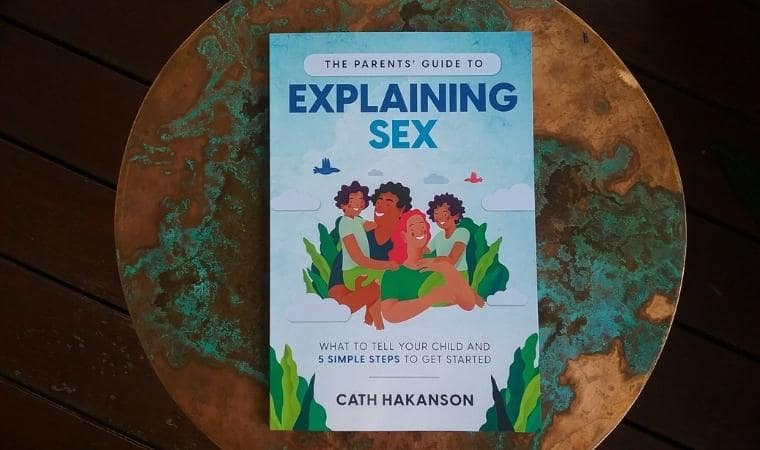 A book that will help you to start explaining sex or sexual intercourse to your children.

Hi, I’m Cath Hak and welcome to Sex Ed Rescue. Sex Ed Rescue is my website, which is where I help parents to find a better and an easier way to talk to their kids about sex, which is why I wrote this book. So this is my book. It’s called The Parents Guide to Explaining Sex. Want to tell your child and five simple steps to get started.

This is what I like about this book here, other than I love the cover and I love the interior even more. But I love the fact that sex is broken down into simple steps. Now this book started off as a printable on my website because so many parents were asking me for help with explaining sex. And I have got some blog posts on the website as well that talk about this. But I found that explaining sex to kids is a really scary conversation with parents.

What this is is a book that will tell it will reassure you and get you talking. So starts off by if you can see that ten important things to know before you start. So these are things that you just need to know because you’re probably going to have some doubts as you’re talking. Then it tells you how to explain sex to your kids. So it gives you ideas on how to get the conversation started and then it also tells you what to say.

Now what’s different about this book is that I’ve got two sets of explanations. So the traditional, which is like the man and the woman, the man puts his penis and the woman’s vagina, those explanations are in there. But I’ve also added an inclusive so inclusive of all genders and bodies. So the person with the penis puts their penis inside the other person’s vagina. So that’s in there as well.

It also talks about the different ways how babies can be made. So it talks about surrogacy, adoption, IVF, and all those other different ways as well. What I like about this book and I am a little bit biassed is I’ve tried to keep it. Also towards the back before I forget to tell you, it will give you ideas on how to start the conversation. So if you’re thinking, yeah, Cath, I’ve left this too late. My kids eleven or twelve, it doesn’t matter.

It will give you ideas on how to start the conversation. So what it is is also an activity book. So this will be coming out as an ebook as well, which means you can write these things down on a piece of paper. But the idea is that this illustrations to help you with understanding stuff. So it breaks down the different steps.

So you’ll find the five steps here, and then it also goes into what sex is, of course, because that’s the last step of getting into sexual intercourse. But you’ll also find illustrations like this. So these are the traditional illustrations. So we’ve got two people in there and we’ve got their bodies there. But when you get to the inclusive illustrations, you’ll find that what gender could that person be?

You don’t know. So you’ll find that in there and it gives you ideas for starting the conversation also talks about I also talk in here about inclusive. Now, look, I’ve got a Facebook group at the time of recording this video. It’s at about 55,000 parents. And some parents come into this group.

So in this book, there is a section in there that talks about why you would want to be inclusive. And it also talks about the fact that if you are flat out, you don’t have to start off by being inclusive. And that’s why I provide both sets of explanations. At the end of the day, I want you talking to your kids about this, because if you’re not talking, who else is going to do it? They’re going to hear about it at school.

And this is a perfect opportunity for you to start talking about what this is and letting your kids know that they can come to you with their questions. Now, when you get to the back of the book, because you’re going to be talking to your child and they might have questions, there’s illustrations at the back that you can use as well. So they can be things like explaining, answering questions from them. So where do babies come from? What makes the baby?

So anyway, a great book, of course, because I wrote it. But it’s also a book based on what thousands of parents have been telling me that that’s what they need, which is why the first version of this book was written about two years ago. And I’ve evolved it and developed it and expanded it so that it’s going to keep your kids satisfied in regards to getting the information that they need. But it will also help you to explain sex in a way that’s easier and more comfortable for you. I often joke about kids are okay conversation.

It’s a parent who’s more likely to be traumatised by having it okay? Any questions? Just ask me cheers.